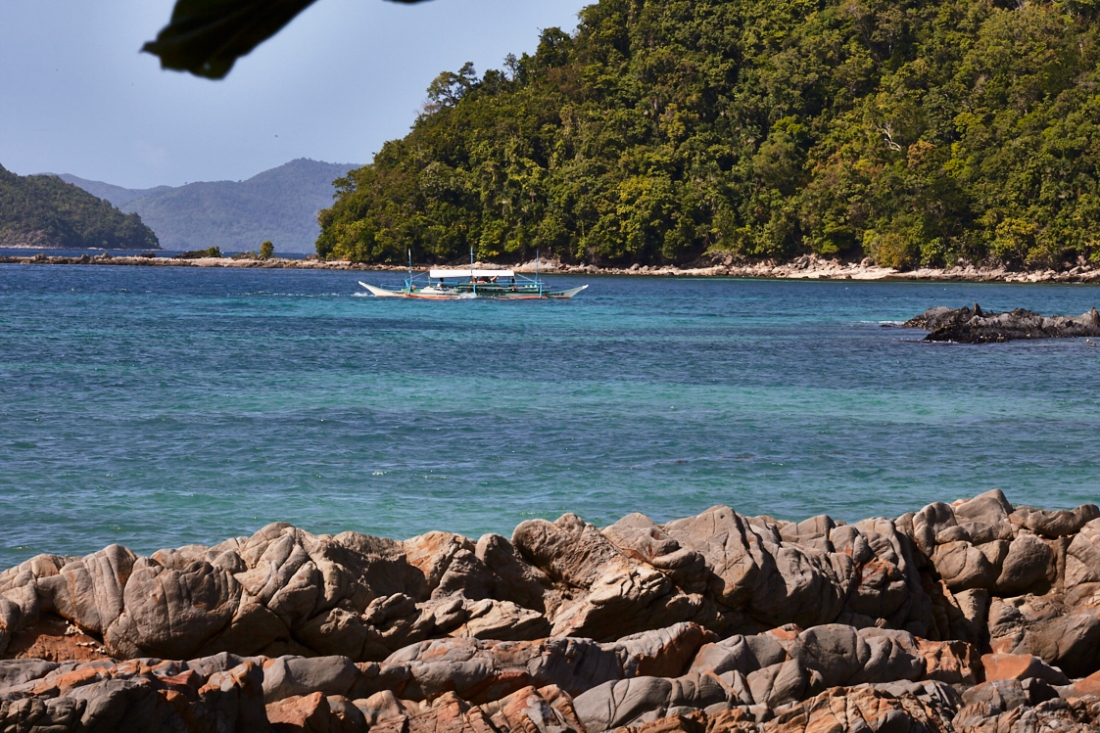 and Boayan Island in the distance

One confusion when talking about the islands and reefs around Port Barton is that the same piece of territory can go by different names. Here is a list of island aliases that may be useful:

The National Mapping and Resource Information Authority sheet 2851  ITAYTAY, not dated, but Road Data legend is from 1953, and elsewhere states “Reprinted January”, and I purchased a new copy in 1997, provides the first name in each entry in this list.

The second entry is from Google Earth (B = shown but not labelled), today, and the third is from Google Maps, also today. The bold entry are other aliases the locals use.

Google maps labels 4 & 5 individually as above, but jointly as Double Island, whereas locals call the first Double Island and the second Solo Island.

As sand does move around the bay, and mangroves will colonise some of these new sand bars, new islands may form. Also currents and storms do take away beaches, especially if the mangroves have been cut (which is not legal now). So it is not surprising that a few islands mapped perhaps 70 years ago are no longer visible on the satellite images.

The NMRIA map shows extensive coral around islands such as Capsalay as well as along much of the coastal area surrounding the bay. These are generally along the 10 fathom contour, and also occur as distinct reefs in several places. 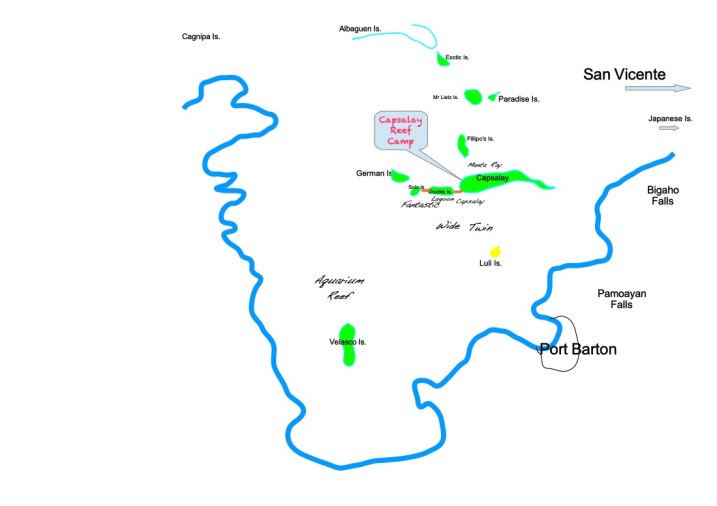 Whilst Jacques Cousteau reputedly praised the area just north of Capsalay as a premier example of a tropical reef, and it was then labelled as “The Aquarium”, much of the extensive stag horn and table corals were wrecked by storms in the late 1990s, following raised sea temperatures that caused bleaching. More localised problems were caused by both dynamite and cyanide fishing in that era as a way of gathering stunned but live fish for the export market. The 1991 Jacques Yves Cousteau film Palawan: Le dernier refuge has some explicit scenes of such techniques in use just along the coast north of Port Barton.

Modern damage has not been so dramatic, but run-off from uncontrolled toilet practices – such as on Double Island or German Island – increase the nutrients which are anathema to a reef, and encourage sea grass or green bacteria to the corals’ disadvantage. Reputable tourist areas with properly constructed septic tanks avoid such problems, but chemicals in some sunblocks are known to damage coral polyps.

Physical damage from boats, especially anchors, and from snorkelers making physical contact with the animals, also degrades the colonies.

The various tours overlap each other to a certain extent, but usually include:

Typically the tours run from 9am to 4pm

I have seen packages online from Php 1100 to 1350. The “standard” boatman’s association price on Port Barton beach today is Php 1200 per person.

Note that Capsalay, Lagoon and Fantastic Reefs are accessible from the beach of Capsalay / Double Island – the whole area south of the tombolo and extending to Solo Island has excellent reefs, and it is also possible to walk / swim to German Island from the  Capasalay to Solo Island chain. Twin Reef is a bit further out and not for the average swimmer.

Tour operators will often supply snorkel gear to their customers, and so will some resorts. Most masks won’t fit Cyrano de Bergerac; my nose is not in that class but I have to select one carefully.  You don’t really need fins / flippers, but do wear something on your feet. Broken glass and sharp coral fragments near a beach is a possibility, touching live coral can kill the animal and sting you; stepping on a stone fish will be extremely painful at best. A rash vest stops jellyfish fragments stinging, and keeps UV off your back if you’re swimming for more than a few minutes. A life vest will help you float at the surface and not touch the bottom, and keep sun off your back. Sunblock may work, but please use reef-safe formulations. [Commonly used sunscreen chemicals (oxybenzone and octinoxate) have been found to bleach coral specimens and cause deformities to coral larvae at concentrations comparable to those found at many popular snorkelling /swimming sites throughout the world. Similar research has been done using sunblocks with NON NANO zinc oxide and titanium dioxide which showed no harm to coral.]

Velasco Island from the top of Capsalay Island,

Pagdanan mainland in the distance

Throughout the area best to snorkel earlier in the day for calm seas. Most can be very shallow when the tides are lowest, when it is good for spotting animals but difficult to swim clear of sea-urchin spines. Beware stone fish spines in the rubble near the shore – wear reef shoes.

Turtles: Lots of backpackers post photos of turtles swimming with them near German Island. That’s partially indicative of the concentration of people as much as turtles, which are seen in many more locations in the bay. I often see them in the area north of Capsalay towards Fillipo’s Island.

Reef names: These are variable, with each boatman using his own version, but also you may find blogs and videos from visitors where the tour operator advertised a particular reef, but on the day conditions (such as over-popularity) caused him to take snorkelers elsewhere. So the tourist misinterprets the location. Some reefs connect directly to others, adding to potential mislabelling.

German Island: Tricky to find the patches of coral around here, so better for spotting turtles.

Capsalay Tombolo Reef: A continuation of the beach / tombolo running between Capsalay and Double Island, so tours often run their boats close to shore at the Double Island end and serve lunch there. (Capsalay is private). The reef is easy to access and starts five or ten metres from the beach and runs all along, with arms running out north / south. Generally in good condition with a good variety of coral and fish. Usually some larger fish at the southern drop-off, and in most seasons a good population of smaller reef fish, clowns in anemones, butterflies etc. Plenty of christmas tree worms in the coral, (spirobranchus giganteus) and some giant clams that have avoided being eaten by local fishermen. I first saw this reef shortly after Heron Island on the Great Barrier Reef, and was more impressed here.

Fantastic Reef: To the west of Capsalay Reef, south of Double island. One visitor said “with some of the best corals I’ve seen anywhere in Palawan … and even in the Philippines!” There are plenty of giant plate corals here.

Twin Reef: From Capsalay Reef in open water, about half way towards Luli Island. It is in very good condition, and covers a good area with a good variety of corals. Several good bommies. Found this short video published in 2017.

Wide Reef: Away from the islands in an area west of Twin Reef and south of Fantastic Reef.

Manta Ray reef: A very large area north of Capsalay Reef Camp. Slowly recovering from the damage inflicted by bleaching and storms in the 1990s. Rumoured to be the area praised by Jacques Yves Cousteau just a few years before the destruction, but not often visited now.

Blue crab beach: Not a reef – an area north of the Capsalay tombolo, populated by hundreds of small blue/ grey crabs that run around in herds, and burrow into the sand as you approach. There are also stingrays in the sandy areas here. They will swim off if you splash around, but be aware.

Exotic Island: A beautiful setting and easy snorkelling from the sand bar between the islands. Clear water and fine sand. Need to swim out about 15 or more metres from the shore.

Aquarium Reef: These reefs are not adjacent to an island but in the open area north of Velasco Island.

Luli Island (sandbar): Not noted for corals, but for the large number of dinner-plate sized  chocolate chip starfish, Protoreaster nodosus. Name derives from “lulubog” (sinking) and “lilitaw” (floating), as it appears with the tide.

Find on this site …